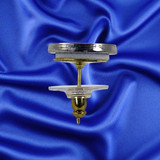 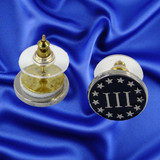 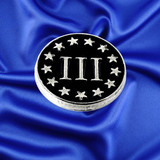 JEWL965-B    This pair of Three Per-centers  1/2" diameter nickel and black enamel ear stud. The Three Per-centers (also styled "3%ers") is an American patriot movement which pledges resistance against the United States government regarding infringement of the United States Constitution. The group's primary purpose is to protect their views of the constitutional rights and has been characterized as being ideologically similar to the Oath Keepers.

The group's name is based on the American Revolution military's armed resistance against the British. The American Revolution constituted three percent of the population. This number has never been accurately calculated, but is generally believed to be the ratio, thus the name. The participation rate of the eligible population is estimated to have been higher than in most other American military conflicts.